Several miles down a dirt road outside Tyler, Texas, the forest of loblolly pines suddenly opens to reveal a private runway and seven airplane hangars. The hangars house eleven planes owned by the Coker family and their friends.

Steve Jr., Sally, Steve III and Janie Coker are a family that flies together. Steve Jr. and Sally were both pilots before they married and have been flying since 1967. Their children have followed suit. Steve III ceremoniously marked his 16th birthday with his first solo flight and 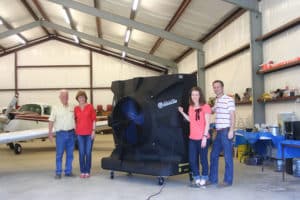 received his pilot’s license the following year. Janie, who has been flying for years as well, hopes to complete her license in 2014.

When they are not flying, you will find the Cokers in their hangars – a particularly sweltering place to be during the summer months when temperatures in the East Texas area average in the lower to mid-90s and often spike into the triple digits. With temperatures that high, the hangars can get hot and uncomfortable fast.

“When you are out here working on airplanes and you are hot, you do not do your best work,” Steve Jr. said. “If you can cool the hangar, you work better and make fewer mistakes. Plus, you enjoy yourself a lot more!”

While the newest hangars the Cokers built are well-insulated, it still does not completely protect them from the brutal East Texas heat. The Cokers needed a practical way to cool down their hangars. They also needed a solution that could be moved from hangar to hangar as needed.

Trying to solve the problem, the Cokers attempted cooling the hangars with large shop fans, but the fans just created a breeze – they did not cool the air. A few years ago a family friend introduced the Cokers to a product that offered the relief from the Texas heat that they needed – a Portacool™ portable evaporative cooler.

“Our evaporative cooler has made it bearable out here during the summer,” Steve Jr. said. “We were very impressed with just how much it dropped the temperature in the hangars. It is a heck of a product!” 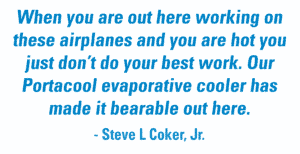