Hard Eight BBQ, as stated in their words, is a “one-of-a-kind” eating experience that combines a unique cooking approach to a wide range of meat from BBQ and 2” pork chops to ribeye and prime rib – with a serving approach that puts you smack dab in the middle of the action.

Die-hard fans can’t get enough of Hard Eight’s flavorful smoked meat. At the restaurant, smoke billows from the pits thanks to a direct-heat cooking method where burned down mesquite coals are put into a pit directly below the meat. As the fat drips off the meat directly onto the coals, it is vaporized and imparts a wonderful 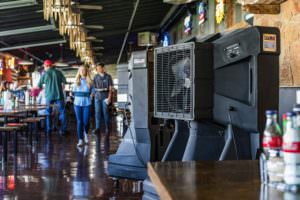 smoky flavor to the various cuts of meats. The aromatic haze greets patrons in the pit area where their selected meat is served before making their way to the rustic restaurant accommodations.

These giant pits don’t only provide delectable cuts of meat; they generate a great deal of heat. At the Coppell location, in the heart of Dallas-Fort Worth, on a 100°F+ day, the pit area will run 15-20°F hotter than the outside temperature. Inside the covered patio area, with the doors open and a metal roof, it can be one hard-to-cool area. General Manager David Blair came to rely on Portacool evaporative coolers to make a cooling difference after quickly realizing fans alone would not cut it.

“I was having issues just making it cooler on the covered enclosed patio, and if we could not get some relief for the patio patrons it was going to be a very long summer,” Blair said. “Originally, I thought we would just have to spend $30,000 on a few air conditioning units, but then I realized our patio’s enclosure doors were not able to shut completely. A/C wasn’t going to work. Then I found Portacool, and things changed.” 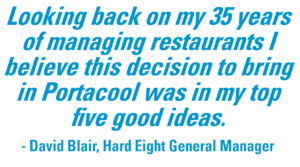 The Hard Eight team strategically places – you guessed it – eight Portacool portable evaporative coolers throughout the patio seating area, which is also home to live music on the weekend, and in the front-line pit area to keep patrons and the pit masters cool. Circulation of cool air is achieved by placing the Portacool evaporative coolers in various directions along the length of the patio and at both ends.

Keeping patrons happy is key to repeat visits. Hard Eight averages a daily crowd of 800-1000 and with the weekend influx – a weekly total of approximately 7,000 visitors.