Known for creating unique rat rods, Steve Darnell’s Welder Up shop in Las Vegas, Nevada, is not the average car customization shop. Welder Up is made up of an eccentric crew of mechanics, fabricators and welders who create one-of-a-kind vehicles. Steve has built a reputation around creating unexpected and imaginative masterpieces. The shop and Steve’s work became famous after his show, Vegas Rat Rods, was picked up by Discovery Channel. On the show, faithful fans get to see mere scraps transform to awesome creations.

In the day-to-day operations of the Welder Up shop, Steve’s team works more than five 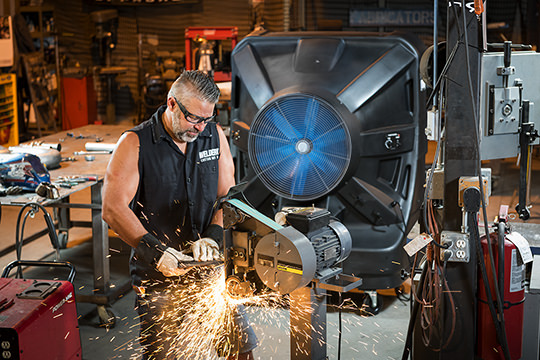 months out of the year in sweltering Vegas temps that typically range from 90-115°F. Given that the shop doors stay open and the fabricating machines put off tons of heat, keeping the work area cool had been a challenge.

“I’m in the shop 75% of my time,” Steve says. “I want to be comfortable and as a shop owner I need it to be cool enough for my guys to be safe and productive.”

After years of using regular industrial fans, Steve needed a better solution that did more than push hot air around the shop. Enter Portacool. Having seen the evaporative coolers at car shows and a few shops, he realized it was time to get one for Welder Up.

His first evaporative cooler was a Portacool Hurricane™ 370, and he hasn’t looked back since he got it in the shop in 2015. In fact, he has added several Portacool Jetstreams of varying sizes to use throughout Welder Up and one that he keeps at his home garage (and not uncommonly by his pool) since his initial purchase.

“We couldn’t make it in the shop without Portacool,” Steve says. “These evaporative coolers are quiet, efficient, easy on my power bill and we can move it wherever we need it. They are an important piece of machinery in my shop.”

Be sure to check out Steve’s work on his site www.welderup.com. You can follow the shop on Facebook and Instagram to see where Steve will be throughout the country and when you can catch him on Discovery Channel.